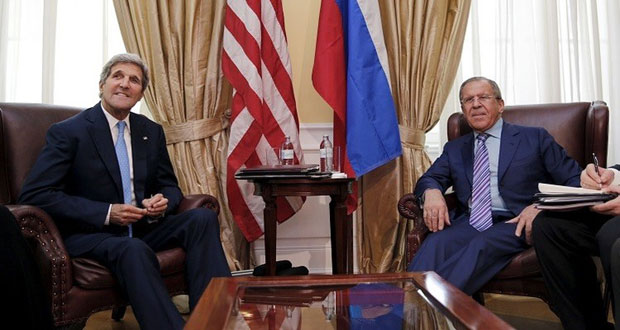 Moscow, SANA- The Russian Foreign Ministry said that the Iranian nuclear file and the situations in Syria and Ukraine were the main topics of the discussions held on Tuesday between Russian Foreign Minister Sergey Lavrov and US State Secretary John Kerry in the Austrian capital of Vienna.

Russia Today website quoted the Ministry as saying in a statement on Wednesday that Lavrov and Kerry, commissioned by the Russian and US presidents after a telephone call between the two presidents on June 25th, had analyzed the prospects of settling the crisis in Syria extensively.

According to the statement, Lavrov stressed that there is no substitute for the political settlement which can be reached by having the Syrian national forces and the international community stand side by side in the face of the terrorist groups which target Syria and which form a threat to regional and international security.

After meeting Kerry on Tuesday, Lavrov announced that Moscow and Washington realize that the problem of the terrorist organization ISIS requires exerting more effective efforts.

Lavrov also declared that he and Kerry agreed to continue communications regarding combating terrorism in the Middle East with the participation of the region’s countries.