A solidarity stand in Ezr’a, Normal life restored to Daraa 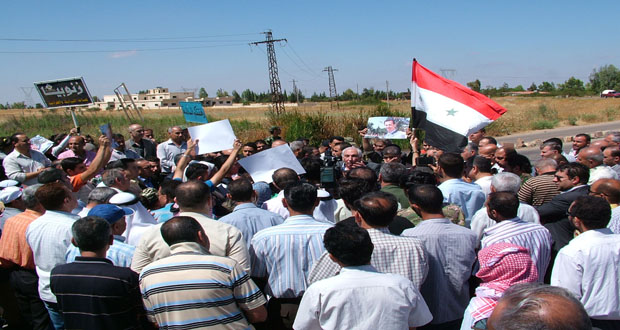 Daraa, SANA – Residents of Daraa city are restoring, with the help of the relevant authorities, normal life gradually after the terrorist attacks targeted the city during the past few days.

Terrorists have recently increased their atrocities, blocking roads that supply the city with basic needs and targeted residential neighborhoods and the National Hospital with mortar shells last Thursday claiming the lives of 20 civilians, in addition to the huge material loss.

Maintenance and repair workshops are working on fixing damages of water, electricity and communications networks while bakeries have worked again to cover the needs of city residents after Thursday’s terrorist attacks.

Health Directorate and the Ambulance System have also raised readiness in light of the terrorist attacks to receive emergency cases, as the general authority of Daraa Hospital has moved its equipment to a nearby hospital after it was directly targeted so that the medical services continue.

Residents of Ezra’ city in Daraa asserted their solidarity with the Syrian Arab army in fighting terrorism, valuing its sacrifices for the sake of defending Syria and its people. This came during a solidarity stand which the residents of Ezra’ staged with the participation of official and local figures at the entrance of the city that was exposed to a terrorist attack with car bomb last week and left 4 dead and 8 injured.

The locals renewed their confidence in the Syrian Army personnel who put their lives on the line to protect the city and its residents, asserting that the people that have a strong, nationalistic, and ideological army like the Syrian Arab Army needn’t be worried about the future.

During the event, Daraa Governor Mohammad Khaled al-Hannous pointed out that the Syrian Arab Army is committed to uprooting terrorism and making the entire country free of Takfiri terrorists, asserting that the solidarity stand is a sincere expression of the locals’ sentiments towards the heroes of the Syrian army who protect them with their lives.