Liberation of Quneitra marked with hope for greater victory over terrorists 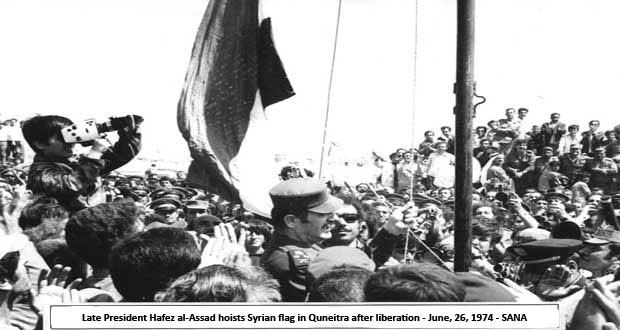 Quneitra, SANA – The 26th of June, 1974 marks a day of pride for Syrians across the country on which the Israeli occupation of the southern city of Quneitra was brought to an end.

The city of Quneitra, located in the Golan Heights, came under Israeli control on 10 June 1967, the last day of the Six-Day War. It was briefly recaptured by Syria during the 1973 War, only to once again fall in the Israeli occupation forces’ hands. It was largely demolished by the time Syria, under the leadership of late President Hafez al-Assad, liberated it from occupation IN 1974.

Up to this day, Quneitra stands a living witness to the barbarity of the Israeli occupation which deliberately inflicted the ugliest forms of savagery on almost everything in the city, leaving churches, mosques, hospitals, schools and facilities flattened even after a ceasefire was announced.

The exalted day of victory against the Zionist enemy continues to send the Syrians’ spirits soaring high over increased confidence in notching up a renewed victory against Syria’s new-old staunch enemies who have constantly been in trouble to subvert the Syrian state operating their terrorist tools all across the country to that effect.

As the people of Golan commemorate the liberation day, their hearts, as those of all the Syrians around the world, brim with hope to “liberate each and every inch of the usurped soil of the occupied Golan.”

The Syrians are no less hopeful about achieving “the greatest victory of all” when the last member of terrorist groups, which have wreaked havoc in the country since early 2011, will be eliminated. Governor of Quneitra Maan Salh-Eddin Ali said just like the Zionist enemy was expelled out of the city “in a landmark victory sealed by our heroic army then,” the mercenary terrorists are to face the same fate as they are already reeling after a string of victories made by the armed forces in various area, the latest was recapturing Kassab town on the border with Turkey.

He highlighted the unshaken will of the Syrian people, “who courageously defied the occupation” and launched a reconstruction process, immediately after the liberation of Quneitra so as for life to return back to the city. 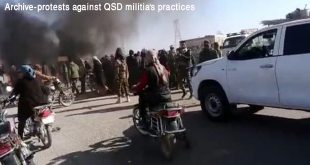