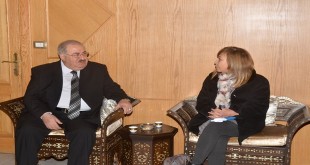 Aleppo Governor discusses cooperation with UNECEF and WHO

Aleppo governor discusses with WHO representative health situation in the province

Aleppo, SANA- Aleppo Governor Mohammad Marwan Olabi affirmed on Friday that contrary to media claims, Sheikh Najjar Industrial City in Aleppo is completely safe by virtue of the steadfastness of the Syrian Army, Internal Security Forces and the people of Aleppo.

During his visit on Friday to factories and industrial establishments in the city, the governor pointed out that the fabrications broadcast by media outlets about terrorists entering the third area of the city come in the framework of the systematic war on the Syrian economy and industry.

The industrial facilities in Sheikh Najjar industrial city are working on holidays, which the minister said is “the best way to refute media lies and fabrications.”

The governor also met a number of industrialists and workers, stressing that the governorate is interested in providing all requirements of the industrial city.

The governor visited a number of military checkpoints in the city where the soldiers vowed to protect the industrial city against any terrorist attack.