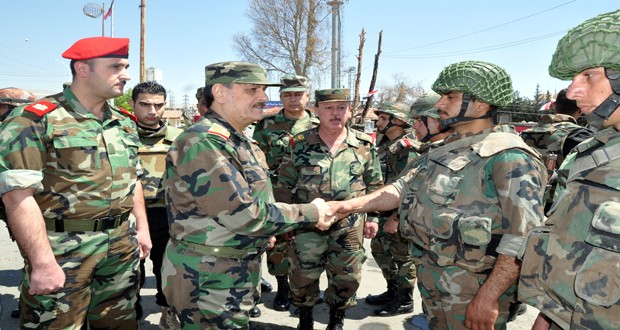 Damascus, SANA – Upon the directives of President Bashar al-Assad, Deputy Commander-in-Chief of the Army and Armed Forces, Defense Minister Gen. Fahed Jassem al-Freij conducted a field visited to an army unit and met the soldiers on the ground on occasion of Martyrs Day.

Al-Freij relayed the greetings of President al-Assad to the soldiers and inspected their conditions and the steps being taken to confront terrorism, voicing pride in the sacrifices and heroics of the Syrian Arab Army’s personnel and their high morale and spirit.

He asserted that Syria is heading to victory over terrorism heedless of all the malicious rumors and psychological warfare.

On the same occasion, the Defense Minister and the Head of the General Staff honored a number of families and relatives of martyrs, with al-Freij asserting that the blood of the martyrs is paving the way towards victory. Army units across the country marked Martyrs Day, with commanders of units delivering speeches on the meanings and values of martyrdom, vowing to continue fighting terrorism until victory is achieved. Military displays and sports performances were also held at military units, while the Military Theatre Troupe held a special performance for children of martyrs.

In the same context, army units’ commanding officers visited injured army personnel, presenting them with gifts and wishing them a quick recovery. They also visited martyrs’ cemeteries and laid flowers on their graves and monuments dedicated to martyrs.