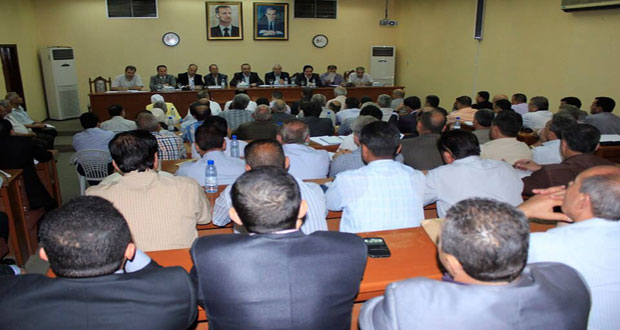 Damascus Countryside, SANA – Governor of Damascus Countryside Hussein Makhlouf inspected the condition of services in Damascus Countryside, especially concerning electricity and water.
During his meeting with heads of municipalities in the province on Saturday, Governor Makhlouf called for rehabilitating and fixing all damages inflicted to the infrastructure by the armed terrorist groups in the areas which the army restored security to.
He also called for providing all needs to manage crises of water and electricity shortages, ensuring a just rationing among all areas and finding appropriate solutions to all difficulties and problems.
Head of Electricity Directorate in the province Zuhair Kharbouti said that the electricity company has managed to provide 600 megawatt of electricity to the southern region from the central region, adding that the company is working on fixing all power transporting cables which were sabotaged by the terrorists.
In turn, Head of the Drinking Water Directorate in the province Husam Haridin said that the water company is making all measures to cope with the low precipitation rate in Syria in this year, adding that the company will dig a number of artesian wells to accommodate needs in the current drought conditions.
The annual rainfall in al-Fijeh basin, the main source of drinking water in Damascus, until 30th of last March was 217,68 mm compared to 568,8 in the same period last year, the al-Fijeh is witnessing a state of “extraordinary drought”, according to the Water Company.
M. Nassr