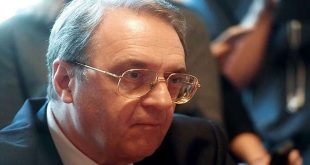 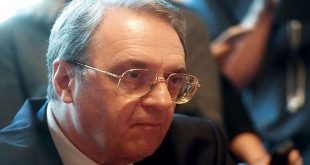 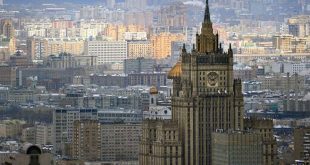 Moscow: US claim on chemical attack in Syria is invitation for provocation by terrorists

Moscow, SANA – Russia and UN deputy special envoy for Syria agreed that a diplomatic political settlement is the only solution in Syria.

This stress was highlighted Friday by the Russian Foreign Ministry in remarks on a meeting that brought together Russian Deputy Foreign Minister Mikhail Bogdanov and the UN Secretary General’s deputy special envoy for Syria Ramzy Ezzeldin Ramzy.

There was a “lengthy” exchange of views on the situation in Syria during the meeting, the Ministry said in a statement.

Both sides, it clarified, stressed that there is no alternative to a political diplomatic settlement for the crisis in Syria that could be reached through an inter-Syrian dialogue based on the Geneva Communiqué of June 30 of 2012.

Ramzy briefed Bogdanov, who is the Russian President’s Special Envoy for the Middle East and Africa, on plans which the UN Special Envoy for Syria Staffan de Mistura have to the effect of pushing forward the inert-Syrian dialogue, the statement noted.

Elaborating on these plans, the statement said they are based on holding a series of separate consultations with representatives of the Syrian government and the opposition, in addition to civil society representatives and some of the countries concerned.

These consultations are to be held in the Swiss city of Geneva in two months starting in late April, according to the statement.

Ramzy also met with Russian Deputy Foreign Minister Gennady Gatilov. Coordinating the efforts of Moscow and the UN towards solving the crisis in Syria was discussed.

The Russian Foreign Ministry’s statement described the exchange of views between Gatilov and Ramzy as “constructive”, and said both sides stressed on continuing coordination of efforts towards arriving at a long-term peaceful solution taking into consideration the results of the two rounds of inter-Syrian consultations held in Moscow.

Meanwhile, Bogdanov announced during a press conference on Friday that opposition figures expressed their desire to participate in the third round of inter-Syrian talks in Moscow.

“Some opposition figures who did not make it to the previous rounds [of talks] are individually coming to Moscow to hold meetings with representatives of Russian Foreign Ministry,” he said.

Answering a question about a third round of consultative meetings in Moscow, Bogdanov said that many opposition members, including Coalition’s representatives, have shown interest in participating.

Moscow hosted two rounds of inter-Syrian talks in January and earlier in April of 2015, with the two sides-the government delegation and opposition figures- approving “Moscow Principles” guidelines in the first and a unified paper assessing the “status quo in Syria” item of a Russian-proposed schedule in the second.

Yesterday, Gatilov announced that a new round of inter-Syrian talks is likely to take place in Geneva next month and expressed Moscow’s readiness to take part in the deliberations on Syria there.

Geneva hosted two rounds of talks on the crisis in Syria. The first was held without the participation of the Syrian sides and came out with Geneva Communiqué.

The second round, however, was turned into a kind of a media show by the Western countries, who practiced a guardianship role on the delegation of the opposition then, which led to the talks ending with no results.