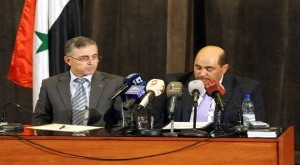 Damascus, SANA-A Palestinian Popular meeting was held at al-Assad library in Damascus on Wednesday under the patronage of Ministry of State for National Reconciliation titled: (Camps are the Gate for Return).

State Minister for National Reconciliation Affairs Dr. Ali Haidar stressed in a speech that the Palestinian cause will remain a central issue for Syria, noting that there is no difference between terrorism that targets Syria and Palestine.

Haidar added that the issue and battle of the Syrian and Palestinian peoples are the same in Syria and in Occupied Palestine and they have one project which is represented by resistance; one that extends from Tehran to Baghdad, Damascus and Beirut leading to al-Quds.

Hundreds of terrorists from the Islamic State in Iraq and Syria (ISIS) aided by other terrorists from Jabhat al-Nusra entered al-Yarmouk Camp for Palestinian refugees on April 1st in an attempt to abort a local reconciliation agreement and commit more crimes against the residents.

Participants slammed the inter-Palestinian wrangling inside Syria, blaming it for the proliferation of terrorist organizations in the Palestinian refugee camps.

They urged the Palestinian factions to “take appropriate decisions in cooperation with the Syrian state to put an end to the tragic situation in Yarmouk,” calling on the international community to bring pressure to bear on terrorist organizations to leave the camp.

The participants vowed that the Palestinian factions will continue cooperation with the Syrian government “until Palestinian refugee camps return safe as before.”