Army establishes control over many areas in al-Zabadani, continues crackdown against terrorists in other areas 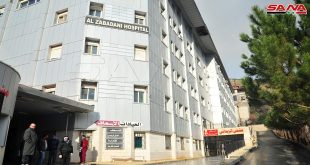 Provinces, SANA – Units of the army and the armed forces on Thursday launched successful military operations against the terrorist organizations in different areas, establishing control over hills in the western mountains of al-Zabadani area in Damascus Countryside Province.

Earlier, units of the army and armed forces established control over the two hills of Shir al –Taqa and Shir al-Jouba in al-Zabadani western mountains, chasing terrorist organizations’ members in the region and inflicting heavy loses upon them in numbers and equipment.

Tens of terrorists were killed and many of their vehicles and weapons caches were destroyed in al-Tiha, Kafr Nasij and Um al-Ousaj in the northwestern countryside of Daraa, a military source confirmed Thursday.

In Inkhel town, which is a movement passage for terrorists towards the old Daraa road, terrorists were directly targeted by the army, suffering heavy losses.

The army’s continued operations against gatherings of terrorists in the strategic hills in Jidour Houran area resulted in killing many terrorists and destroying their vehicles, a mortar launcher and cannons in Tal Antar and Tal al-Harra.

Terrorist organizations acknowledged on their social media pages the death of 70 of their members in Daraa countryside and published their names.

Units of the army carried out intensive operations against terrorists’ dens and supply routes in Mas’hara and Um Batina towns in the countryside of the southern Quneitra province.

Many terrorists were killed and others were injured, while their equipment and vehicles were destroyed in the operations.

The army also killed terrorists and destroyed their vehicles in the main square on the outskirts of al-Baath city in Quneitra.

The army, supported by air force, continued striking terrorist gatherings hard in the surroundings of Idleb, inflicting them heavy losses.

Earlier, The army foiled an attempt by terrorists of different organizations, including Jabhat al-Nusra, to infiltrate Idleb city in northern Syria, a military source stressed Thursday.

The army units are hunting down the fleeing terrorists around the city after they had killed many of them.

The army operations resulted in killing tens of terrorists, destroying many of their dens, 4 armored vehicles as well as 7 vehicles equipped with heavy machine guns.

Terrorist organizations acknowledged on social media the killing of a large number of their leaders. Those included Hassan al-Khalifa, leader of “Omar al-Farouq Battalion” and terrorist nicknamed Abu al-Baraa al-Masri, one of the leaders in Jabhat al-Nusra among several others.

Units of the army killed and injured a number of terrorist organizations’ members and destroyed their arms and ammunition in a special operation in Hreitan town in the northern Aleppo province.

A number of vehicles for terrorists were destroyed in Khan Touman town in Jabal Samaan area, 10 km north-west of Aleppo city.

An army unit carried out a special operation against terrorists’ gatherings in Batbo village and Khan al-Asal town to the west of Aleppo. Several terrorists were killed and their arms and vehicles were destroyed during the operation.

More terrorists were left dead or wounded, while arms and ammunition destroyed as a result of concentrated operations that targeted their dens and gatherings to the east of Tal Arn town, which is located to the north of al-Sfaira area in northeastern Aleppo.

Clashes erupted between army members and terrorists on the eastern parts of Khanaser town, which resulted in deaths and injuries within the terrorists’ ranks.

Units of the army destroyed a bulldozer belonging to terrorists and killed many of them during special operations against their dens in al-Ghanto village in the central Homs province.

The army continued its intensive operations against terrorists’ hideouts and inflicted heavy losses upon them in Abu Huwadit, al-Msheirfeh al-Shamaliyeh, al-Khreijeh, al-Msheirfeh al-Janoubiyeh and the southern hills of Salam Sharqi village in the eastern countryside of Homs.

An army unit killed many terrorists of the Islamic State in Iraq and Syria (ISIS), injured others and destroyed their vehicles in Rahoum village.

The army and armed forces kill terrorists and destroy their vehicles in the main square on the outskirts of al-Baath city in the southern Quneitra province.

Homs
Units of the army and armed forces destroyed a terrorist organizations’ bulldozer in al-Ghanto, al-Rastan and their hideouts in the eastern countryside of Homs province.