Syria wins three medals in Championship of weightlifting in UAE 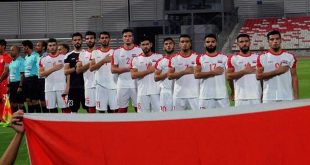 Syria placed in Group D in 2018 AFC U23 Championship draw

Earlier, player Noura Baddour won the silver medal in the 41 kg category. The number of the medals of the Syrian team raised to three medals.

The events of the competition will continue in Dubai until next Wednesday with the participation of more than 130 athletes representing 25 countries.

Teams achieve good results in this events will qualify for the Rio 2016 Paralympic Games.