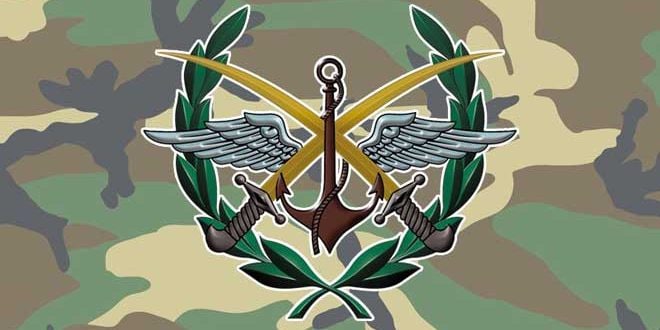 Damascus, SANA- Units of the Syrian Arab Army on Wednesday repelled a terrorist attack in the southern countryside of Idleb.

“Our brave armed forces on Wednesday morning responded to a massive attack launched by terrorist groups from the direction of al-Bara – Kansafra, , Ma’arat Mohas – al-Bureij, after intense firing with heavy weapons at military posts of Army in that area,  southern Idleb,” the Ministry of Defense said in a statement.

The ministry added that the terrorist attack lasted for hours, and resulted in the terrorists suffering heavy losses in equipment and personnel, and twelve terrorists were killed or injured,

“The terrorist attack lasted for hours and the terrorists inflected great losses in equipment and, personnel, as 12 terrorists were killed or injured, indicating that some bodies were withdrawn, including the terrorists’ leader, in addition to the confiscation of some weapons,” The statement added.