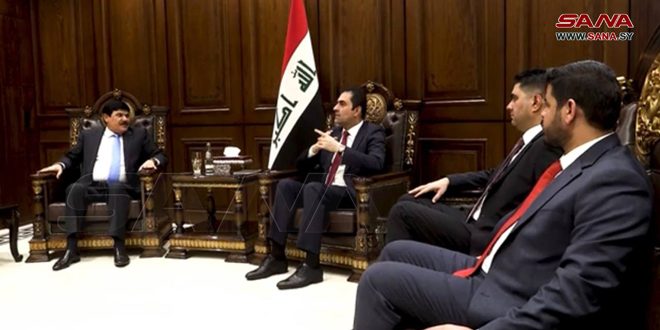 Baghdad, SANA- First Deputy Speaker of Iraqi Parliament, Mohsen al-Mandalawi, discussed on Monday with Syria’s Ambassador in Baghdad, Sattam Jada’an al-Dandah, means of developing cooperation in all domains, particularly in the parliamentary one.

“During the meeting, the two sides affirmed willingness to enhance bilateral relations and coordinating stances at Arab and international parliamentary forums in the interests of both peoples,” Ambassador al-Dandah told SANA correspondent in Baghdad.

He added that both sides also showed aspiration to boost cooperation in the domains of economy, trade, health and combating terrorism, in addition to facilitating the passage of Syrian nutritional exports into Iraqi markets.

A statement for the Iraqi Parliament, in turn, said that Mandalawi stressed the importance of activating the role of the parliamentary friendship committees between the two countries and expanding cooperation to include trade, economic and security cooperation.