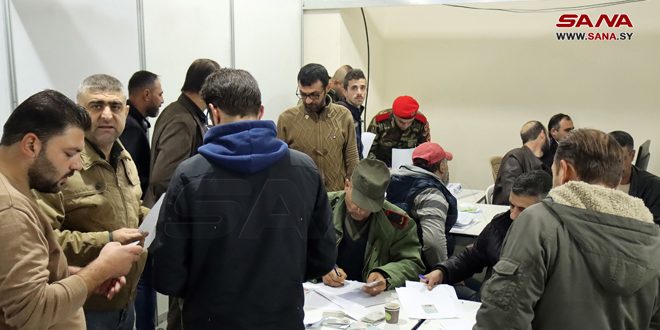 Homs, SANA- about a thousand wanted civilians, military deserters, and those who have evaded the compulsory and reserve military service had their files settled in the center established by the competent authorities in al-Waer neighborhood in Homs according to the agreements proposed by the state. SANA’s reporter in Homs stated that a week after the opening of the settlement center in al-Waer neighborhood in Homs city, the settlement committees settled the situation of more than a thousand wanted civilians and deserters from reserve and military service

In a statement to SANA reporter, Sheikh Mazyad al-Daher, Sheikh of the al-Dawahra clan in Homs countryside, said that the settlement is a great opportunity for all the sons of the homeland who were misled to return to their homeland.

A number of those who had their status settled stressed that it is an opportunity to return to their normal life.