Mikdad calls on Indian companies to invest in Syria 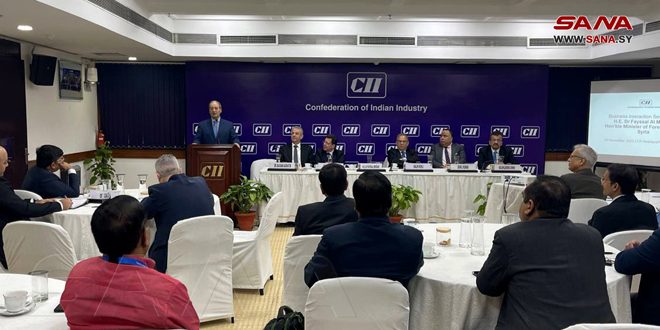 New Delhi-SANA- Minister of Foreign Affairs and Expatriates, Fayssal Mikdad, called on Indian companies to invest in Syria; “Syria which is looking east for its reconstruction”. Meeting with the Federation of Indian Chambers of Industry in the capital, New Delhi, Mikdad praised the strong and deep Syrian-Indian relations and the need to strengthen them in all fields, in the interest of the two friendly countries, referring to India’s positions in support of Syria in international forums.

“Syria is looking east for its rebuilding in cooperation with friendly countries, including India,” Mikdad pointed out.

Giving a presentation on the most important developments in the situation in Syria , Mikdad stressed that Syria’s victory over terrorism reduced the risk of its spread to other countries and regions.

In turn, Chairman of Syria’s Planning and International Cooperation Authority, Fadi Salti Al-Khalil, spoke about investment opportunities in Syria, and gave an explanation about Investment Law No. 18 of 2021 and the sectors in which it is possible to invest, such as electricity, renewable energy, infrastructure, medicines, fertilisers, and fodder.

For his part, President of Federation of Indian Chamber of Commerce & Industry (FICCI), Nalin Kohli, spoke about the importance of relations binding the two countries and the necessity of cooperation and benefiting from opportunities in them.

Representatives of Indian companies expressed their willingness to invest in Syria and contribute to the reconstruction of infrastructure destroyed by terrorism, and to transfer Indian experiences in the field of modern technology to public and private sector institutions in Syria.