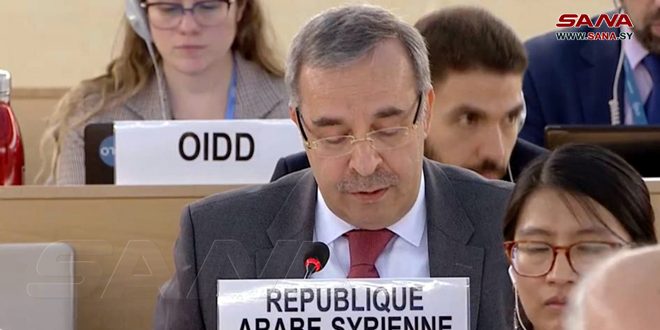 Geneva, SANA- Syria’s permanent representative to the United Nations and international organisations in Geneva, Ambassador Hussam Edin Aala, affirmed that the British draft resolution submitted to the Human Rights Council (HRC)on the so-called “Human Rights Situation in Syria” lacks neutrality and objectivity and repeats accusations that have no basis on the ground.

Such draft confirms its selective and biased nature directed at defaming Syria as part of a political campaign sponsored by the countries supporting the draft resolution,Aala underlined.

Delivering a speech before the 51st session of UNHRC, Ambassador Aala said, “Syria renews its rejection of the unilateral and politicized decisions targeting it, such as the draft resolution before the Council without justification, and only three months after passing a similar text submitted by UK and a group of countries insisting on exploiting the HRC, and its mechanism to serve their interventionist agendas in a way that violates the principles of the UN Charter, especially the principles of respecting the sovereignty of states, and refraining from interfering in their domestic affairs and violating the principles of impartiality, objectiveness and neutrality and non-selectivity on which this Council is based.

“In light of the liquidity crisis, the credibility crisis and the political motives that control the draft resolutions submitted to the council under Item 4, and the double standards in the positions of the sponsoring countries of those resolutions, Council members bear a special responsibility to stop wasting resources and confronting this politicized approach that undermines the Council’s role and mandate under UN General Assembly’s resolution 60/251.”

Ambassador Aala went on to say “Apart from the theatrical rhetoric that characterizes the statements of the UK’s ambassador, whose country’s forces and the US forces affiliated with the so-called international coalition, unilaterally and illegally, destroyed the city of Raqqa over the heads of its residents without any regard for humanitarian standards ,the delegation of Syria rejects the fabricated allegations and illegal mechanisms promoted by the draft resolution, including those that, by their technical nature, fall outside the Council’s competence.”

Aala affirmed Syria’s commitment to protect its citizens, its keenness to respect human rights under its national laws and contractual obligations, along with its rejection of the attempts by the sponsoring countries of the draft to use it to interfere in the course of the political process facilitated by the UN, which is based on dialogue among Syrians and their exclusive right to chart the future of their country away from external interventions.

“The British draft resolution ignores the suffering of the Syrians as a result of the terrorist war, the Turkish and American aggression on Syrian lands, the looting of its natural and economic resources, and the repeated Israeli military attacks on civilian facilities, and ignores the role of the economic blockade in violating the human rights of Syrians and impeding the return of the displaced”, Aala stressed.

Ambassador Aala concluded by calling on the members of the HRC to vote against this British draft . 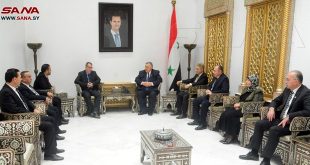 Damascus, SANA-Speaker of the People’s Assembly, Hammoudeh Sabbagh, stressed the importance of supporting and boosting …