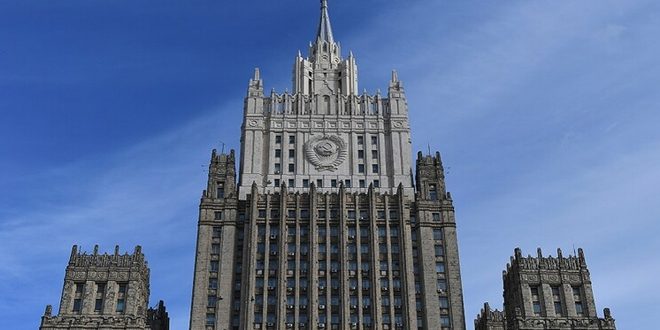 Moscow, SANA- The Russian Foreign Ministry affirmed that the West wants to continue politicizing the humanitarian aid file to Syria and obstructs any efforts that are incompatible with its schemes.

Commenting on the UN Security Council’s resolution last Tuesday in extending the delivery cross-borders humanitarian aid, “The UN resolution reaffirms the urgent need to expand the (internal) access from Damascus to all through Syria and intensify projects for rapid reconstruction of civilian infrastructure and the easing of unilateral sanctions imposed on Syria.”, RT quoted the ministry as saying in a statement that published on its website on Friday.

The statement stated that the latest resolution, based one Russian draft , was blocked by the US, UK and France.

According to the statement, “the resolution demonstrated once again the unwillingness of the Western “troika” to reach a compromise in the UN Security Council and their clear will to continue politicizing the purely humanitarian issues.”

On July 18, Russia vetoed a Western draft resolution on extending Resolution 2585, adopted by the Council on the 9th of last July concerning the delivery of aid across the Syria-Turkish borders for 12 months.