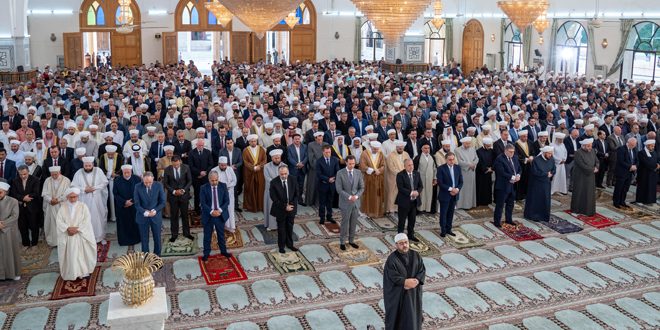 Sheikh Mahmoud Akkam, who led the prayer, delivered the Eid sermon affirming the noble meanings of Eid al-Adha that brings joy to all, particularly because it comes following the Hajj ritual.

He referred to the sacrifices offered by the Syrians for the sake of Homeland which led to Aleppo’s victory.

Sheikh Akkam thanked the Syrian Arab Army for its sacrifices to liberate Aleppo from terrorism, praying God to protect Syria.

Following the prayer, President al-Assad spoke to the citizens who embraced him saying that “As Aleppo is a great city with its history, structure and the patriotism of its people, it has been a target of war and enemies, and because it is great, Aleppo’s people have decided to withstand in this war and to have victory in the war and in the reconstruction process.”

“Aleppo’s citizens have written a great story, a story of patriotism and patience,” President al-Assad said, adding that the story which was written by Aleppo’s people for us as Syrians is a lesson for history and a lesson in patriotism.

“Yesterday, we visited the thermal station and saw how the western warplanes, particularly the US, destroyed it, and how the terrorists then came to plant mines and bomb what has remained of it to prevent us from using one piece in any place in Syria,’ the President added. President al-Assad said “we went to the water pumping station in Tal Hasel and saw how they did the same operation and how they destroyed Palmyra, and we see how they seek to destroy al-Aqsa mosque… so, we talk about one method.”

President al-Assad added “We went to markets, and as you know, we started to reconstruct a number of them like Assaqtiyah, Khani al-Harir,” referring that what has happened in the war, particularly regarding Aleppo is a mere deviation in the track of history and its context and “we will correct this context to return it to its normal place.”