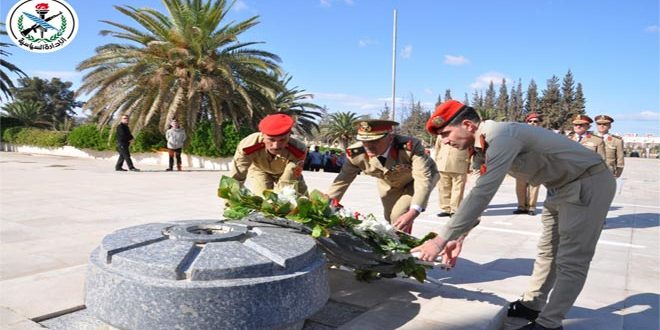 gave speeches during which they indicated that this occasion has become a symbol for sacrifice and patriotism.

The field officers pledged to the homeland, people and leadership, that the martyrs’ sacrifices would remain a momentum for more efforts and giving for the sake of its dignity, sovereignty and independence.

Martyrs’ Sons and Daughters’ Schools Establishment  also celebrated this occasion with a national ceremony that included lyrical paragraphs and theatrical performances that express the value of martyrdom and its lofty meanings that will remain firmly rooted in the conscience. The commanders of the military regions visited the shrines of the martyrs, laid wreaths on behalf of President Bashar al-Assad, the Commander-in-Chief of the Army and Armed Forces on the memorials.

They also visited the wounded in military hospitals and wished them and their generous families continued health and wellness.