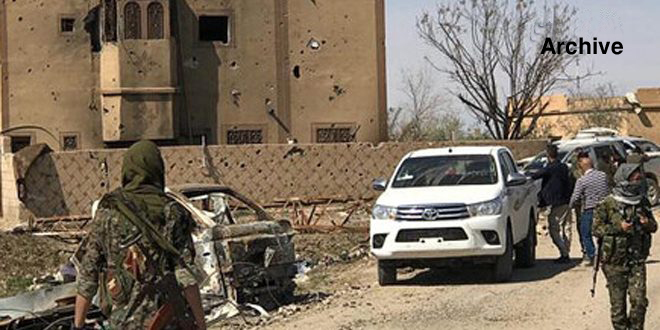 Raqqa,SANA- The US occupation-linked QSD militia
kidnapped a number of civilians from Raqqa city to force them to fight within its ranks.

Local sources told SANA that armed groups of QSD stormed a number of houses in Al Mujamma Street in the city of Raqqa and Hazima Farm in the north, and kidnapped six civilians, including four young men, whom it took to one of its camps for training and forcibly force them to fight in its ranks.

In the same context, SANA’s reporter quoted local sources in the area as saying that gunmen affiliated to the QSD militia stole water lines near the main tanker in the village of Al-Tarwazia, north of Raqqa, and transferred them to their areas of control, which led to depriving the people of drinking water and irrigating their crops.