Haddad : Russia will win war against neo-Nazism and racism in Ukraine 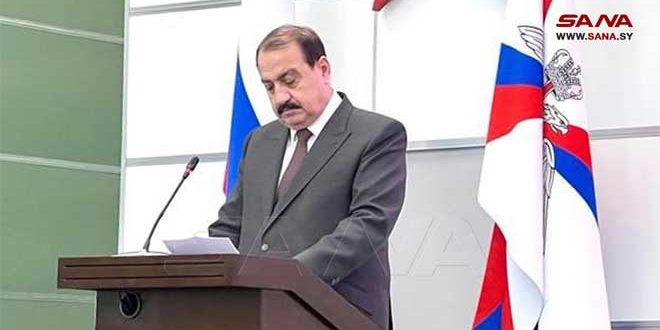 Moscow, SANA-The Patriot Convention and Exhibition Center in Moscow hosted the opening and plenary sessions of the 1st International Scientific and Practical Conference on Military Commemorative Activities titled “Memory is Stronger Than Weapons”. The sacrifices offered by sons of the Russian Federation, whether in the fight against terrorism in Syria, alongside the heroes of the Syrian Arab Army in defense of the world and human civilization from the danger of the dark takfiri groups or the heroes of the Russian armed forces in the military operation in Ukraine are no less than the sacrifices offered by their ancestors against Hitler’s Nazism”, Syria’s Ambassador to Russia, Riyad Haddad, said during the opening ceremony.

Haddad reiterated Syria’s full support for Russia’s decision in its military operation in Ukraine, saying “we all hope that it will achieve victory from this battle because it is fighting in defense of right and justice, while others are fighting through mercenaries and extremists and Nazis from all parts of the world, including elements of terrorist groups that we fought in Syria together, and as the victory was clear in the battles to defeat terrorism in Syria, the clear victory will come in the war against neo-Nazism and racism in Ukraine.” Haddad stressed that the importance of this event is increasing today in light of what the world is witnessing in light of the Russian special military operation to defend the people of Donbass and protect the Russian people from the threats of NATO.

Bulgakov also quoted Shoigu as saying that the ministry has great respect for the memory of the soldiers who were martyred by searching for the names of unknown heroes, which plays an important role in the patriotic education of generations of Russian citizens and in the fight against falsification of Russian history.

He pointed out that this conference is an important step towards developing the activities of military memorials and further strengthening efforts in support of national spiritual values and ensuring the continuity of national military traditions.