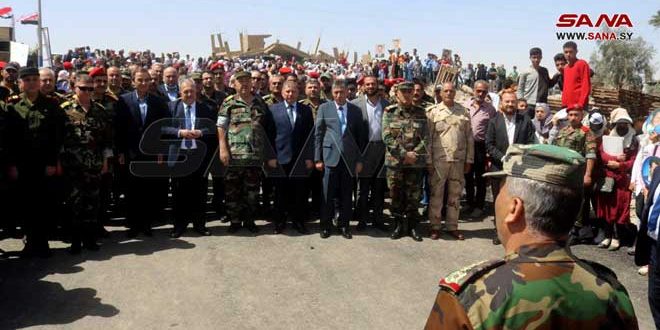 Deir-Ezzor, SANA- A governmental delegation headed by Prime Minister Eng. Hussein Arnous started a visit to Deir Ezzor province to inspect a number of service and development projects and their implementation rates.

Engineer Hussein Arnous inaugurated the temporary bridge linking the two banks of the Euphrates River, which was completed by national cadres.

The bridge extends for a distance of 220 meters and a width of 10 meters. It is designed for a load of approximately 100 tons, and loads of 70 tons were conducted experimentally. 2022-04-20
bushra
Share
Previous Citizens of Qamishli countryside expel vehicles of US occupation
Next One child killed in blast of landmine left behind by ISIS terrorists, Salamiyya countryside