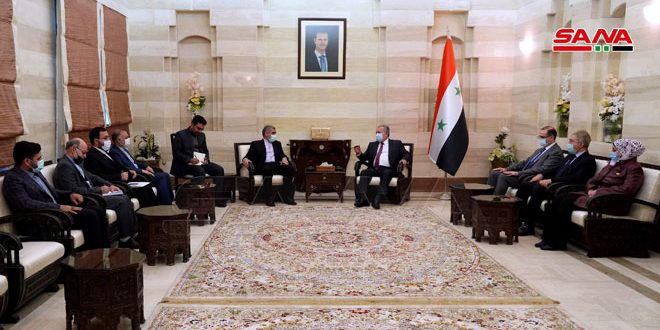 Damascus, SANA- Prime Minister, Hussein Arnous, discussed on Thursday with Vice-President of the Shura Council of the Islamic Republic of Iran, Ali Nikzad, and an accompanying delegation, means of boosting relations between the two countries in the parliamentary, economic, trade and investment fields, in addition to a number of issues of common interest. Talks during the meeting stressed the strategic relations between the two countries and the two friendly peoples, and the importance of opening new horizons for cooperation and enhancing coordination and joint action to confront the unilateral coercive measures imposed on the peoples of the two countries by the West, as well as to overcome any obstacles that face the implementation of agreements and understandings signed between the two countries in various fields and to increase the number of joint investment projects in the benefit the two sides.

Arnous stressed the important role of legislative institutions in the two countries in supporting the executive authorities to achieve joint cooperation programmes, and appreciated those who sponsor true democracy that stems from the interests of the people and not imposed from abroad.

Arnous stated the importance of strengthening cooperation in various fields, including agricultural production and oil derivatives, increasing the level of trade exchange and economic and social networking.

He pointed to the depth of the strategic relations between Syria and Iran and their stance in the face of pressures and attempts to subjugate the peoples of the region, affirming his appreciation for Iran’s leadership, government and people,s support for the Syrian people in the face of the blockade that directly targets the livelihood of the Syrian citizens and their basic needs.

For his part, Nikzad affirmed his country’s continued support for Syria and assistance in developing the Syrian economy and working at all levels to develop cooperation between the two countries in a way that eases the suffering of the Syrian people, pointing out his country’s readiness to participate in the reconstruction phase in Syria.