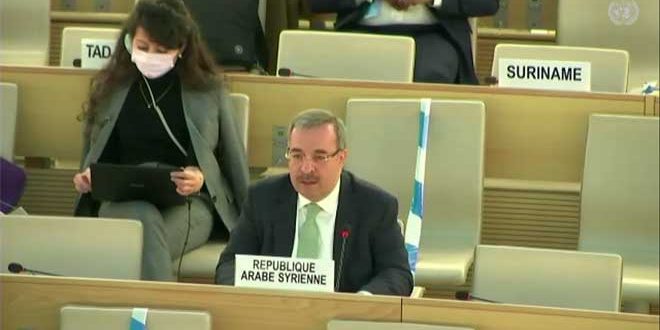 Geneva, SANA- Syria demanded the Human Rights Council to hold Israel accountable for its systematic crimes against human rights of Syrians in the occupied Syrian Golan which include intensifying the settlement and violations , the theft of lands and natural resources ,in addition to practices of the demographic change.

Syria’s Permanent Representative to the United Nations in Geneva ,Hussam Eddin Ala ,said in a statement on Friday during the 49th session of Human Rights Council “ Israeli grave violations in the occupied Palestinian lands ,including al-Quds, and in the occupied Syrian Golan ,along with the deteriorated humanitarian conditions resulted from the repeated Israeli aggressions and blockade been carried out against besieged Gaza strip since 15 years are still the most prominent feature of the situation there”.

“The Israeli entity is still carrying out its grave violations against the Palestinians and Golan’s people , intensifying its settlement ,seizing lands and plundering the natural resources.” Ala added.

The Syrian ambassador reiterated Syria’s rejection of the illegal settlement schemes carried out by the occupation aimed at changing the legal and demographic feature of the occupied Syrian Golan,

He called for the non-recognition of any status resulted by the illegal measures of Israeli occupation ,along with refraining any process that consolidates it.

Ala went on to say “Syria condemns the occupation and its violations in Golan and calls on the Human Rights Council to document these practices and hold Israeli entity accountable for them”.

He added that the Israeli aggressions would not be carried out without the limitless support of the West and U.S.

“Syria stresses its firm right to restore Golan completely and categorically refuses the unilateral measures taken by the Israeli entity to consolidate its occupation.” Ala concluded. 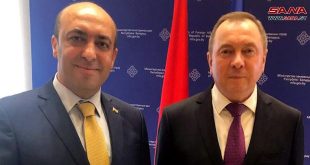