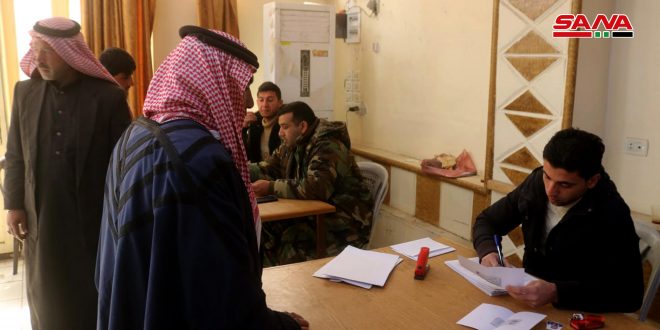 Deir Ezzor/Raqqa, SANA- Dozens of the wanted and the military deserters have joined the settlement process in Raqqa and Deir Ezzor provinces to have their status settled.

SANA’ reporter said that the settlement processes are continued at al-Amel settlement center in Deir Ezzor and al-Sabkha center in Raqqa eastern countryside amid large turnout by the wanted and the military deserters and simplified measures by the committees concerned.

Thousands of people had their legal status settled during the settlement processes in Daraa, Aleppo, Deir Ezzor , Damascus countryside and Raqqa, as all of them returned to their normal lives in their areas, and some of them joined the ranks of the Syrian Arab Army to fulfill their compulsory or reserve service.