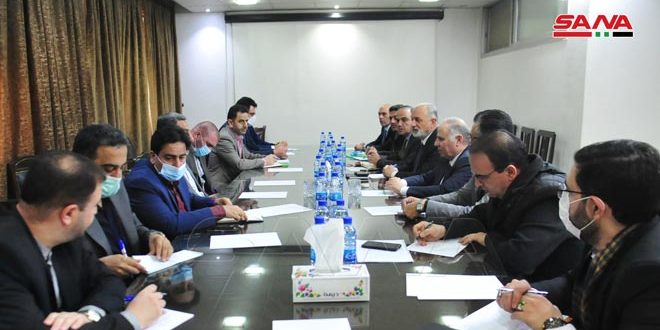 Damascus, SANA- Syria and Iran have discussed means to strengthen cooperation relations between the two countries and the efforts made to implement water projects.

That came during a meeting held Tuesday between Minister of Water Resources, Dr. Tammam Raad, discussed with Advisor to the Minister of Defense and Chairman of the Economic Cooperation Council in Iran, Eng. Mustafa Ethbati, and the accompanying delegation. The two sides agreed to set up a well water purification plant and sewage treatment plant in Damascus countryside, after revising the technical and financial study for the two projects.

Minister Raad stressed the need to bolster cooperation in a way that would contribute to enhancing relations between the two countries.

He shed light on the Iranian government’s efforts, which led to the implementation of the desalination plants of four wells in Hasaka province and the provision of drinking water to the city’s residents after the Turkish occupation forces cut off the water sources feeding it from Alouk wells. In turn, Eng. Ethbati highlighted the fruitful and constructive cooperation that contributes to the rapid implementation of projects and pushes the relations between the two countries towards further development and prosperity.