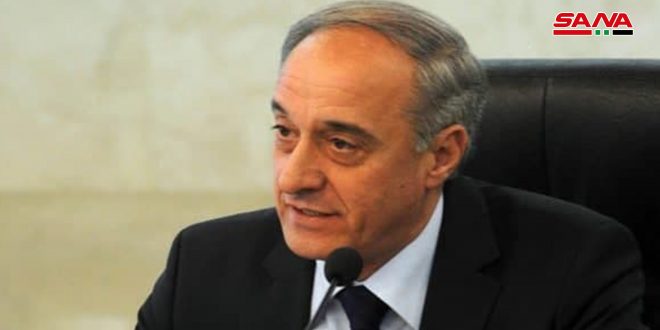 Damascus, SANA- Assistant Minister of Foreign Affairs and Expatriates, Dr. Ayman Sousan, reiterated Syria’s support for friendly people of Russian Federation in face of the campaign launched by the colonial western powers on top of which the US and its tools in the EU.

Sousan’s remarks came during a meeting with a number of correspondents of international news agencies in Damascus on Tuesday.

Dr. Sousan pointed out that the Russian Federation exercises its legitimate right of self-defense in the face of an undeclared war launched by the West for more than twenty years through expansion of NATO and besieging Russia with military bases, with the aim of maintaining the US and the West hegemony on the world.

The misleading, distortion and fabrication campaigns launched by the West against the Russia bring to mind the lies and hypocrisy of the West in its unfair war against Syria, all this aimed at demonizing this friendly country and harming its reputation on the international arena, Dr. Susan said.

He strongly condemned the escalation practiced by the US and its tools, which poses a serious threat on the world’s peace and security, stressing that the unipolar system will be end and democracy and a new world system would achieve stability in the world.

He called upon the international community to face the arrogance and hegemony approach of the western colonial states.

Dr. Sousan said that Washington is only interested in protecting its interests, even if this leads to the destruction of countries and the killing of peoples, asserting that the Us would lose its credibility.

Sousan concluded by expressing confidence in Russia’s ability, with the support of its free friends in the world, to face the fierce war and misleading campaigns with the same determination that Syria has defeated the terrorist groups that are supported by the western colonial powers, reiterating the Russia’s growing role on the international area has become an urgent necessity and demand for many people of the world to protect the international security and stability.