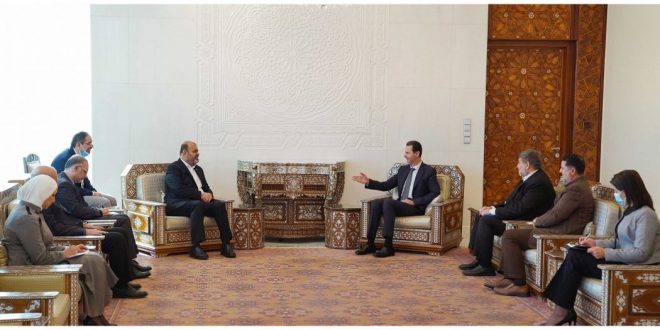 Damascus, SANA- President Bashar al-Assad received on Wednesday Minister of Roads and Urban Development, and Head of the Syrian –Iranian Joint Economic Committee of the Iranian side ,Rostam Qasemi, and the accompanying delegation.

During the meeting, bilateral relations between Syria and Iran were discussed, especially at the economic level.

President al-Assad affirmed the importance of establishing new projects that achieve the joint strategic benefit of Syria and Iran and link between the business sectors of both countries.

The talks also dealt with means of expanding areas of bilateral work in public and private sectors, and encouraging joint investments with the aim at giving new impetus to trade and economic ties.

For his part, Qasemi underlined Iran’s stance in support of the Syrian people in the face of terrorist war which they are being subjected to it.

He also affirmed his country’s keenness to widen cooperation between Syria and Iran in all fields that serve the interests of the two friendly peoples. In turn, Foreign and Expatriates Minister, Faysal Mikdad discussed with Qasemi issues of common interest between the two countries, and the need to upgrade the economic relations between them so that they rise to the level of political relations.

Qasemi stressed the brotherly relations that unite the two countries and the peoples, pointing out the two sides’ determination to seek achieving real economic and trade partnership,

He indicated that his visit aims to activate economic relations, especially in the land and maritime transport sector, increase the number of flights and the volume of trade exchange between the two countries.