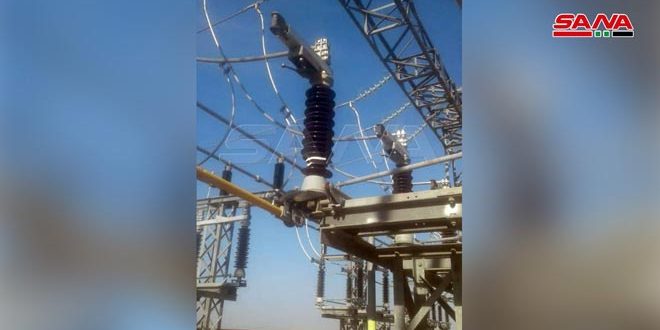 Hasaka, SANA- Maintenance works at Tal Tamer power transmission station in Hasaka countryside stopped in light of the fierce attacks by the Turkish occupation and its terrorist mercenaries with artillery shells on the area.

SANA reporter said that the Turkish occupation forces and mercenaries on Thursday targeted Um al-Keif village in Tal Tamer countryside with artillery and several shells that fell near the maintenance workshops of the General Electricity Company which is trying to mend the defects in the network as a result of the attacks of the Turkish occupation on Wednesday.

Director of the Electricity Company in Hasaka, Anwar Okla, said in a statement to SANA reporter that the cadres of the workshop are of good health and no casualties were reported in the Turkish aggression.