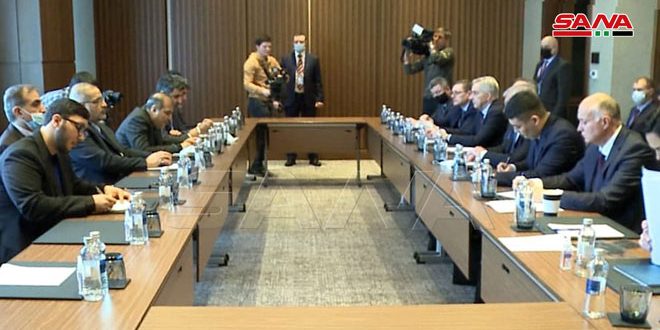 Nur-Sultan, SANA- The Russian delegation to the 17th Meeting on Syria in the Astana Format, headed by the Russian President’s Special Envoy to Syria Alexander Lavrentiev, met today in the Kazakh capital, Nur-Sultan, with the Iranian delegation headed by Senior Assistant to Iranian Foreign Minister for Special Political Affairs Ali Asghar Khaji.

Talks during the meeting dealt with coordinating the two delegations’ stances regarding the situation in Syria and discussing the points on the meeting’s agenda.

The 17th regular Meeting on Syria in the Astana Format started activities on Tuesday morning in the Kazakh capital, Nur-Sultan, and it will last for two days.