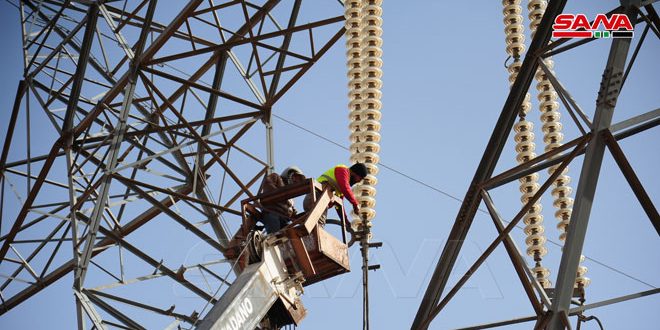 Daraa, SANA – The maintenance workshops of the Ministry of Electricity continue to rehabilitate the electrical interconnection line with Jordan, and the workers are doubling their efforts to finish the work by the end of the year, in preparation for providing Lebanon with part of its electrical energy requirements from Jordan via the Syrian network, based on the three countries’ agreement on October 6. In a statement to SANA’s reporter, Minister of Electricity, Eng. Ghassan Al-Zamil, pointed out that the line connects the North Amman  with Deir Ali stations.

He added that the 50 percent of its rehabilitation has been accomplished by national to be completed by the end of this year, so that the process of electrical interconnection between Jordan, Syria and Lebanon will start effectively.

Inspecting the work process in the project, al-Zamil said that the line had been exposed to enormous damage throughout the war years.

He added that Re-repairing it contributes to maintaining the stability of the electrical system, ensuring the reliability of the supply and reducing the frequency of disconnection.