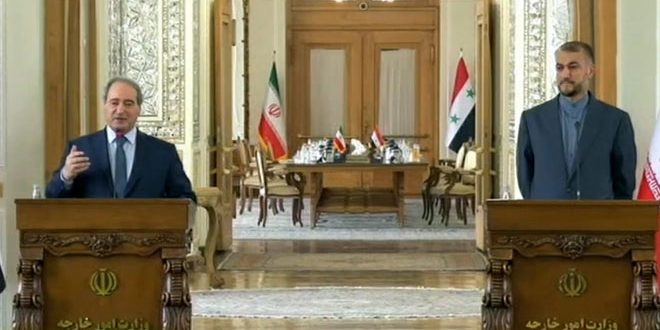 Tehran, SANA- Foreign and Expatriates Minister, Fayssal Mikdad, said that the Syrian-Iranian relations are strategic that aim to build a promising future for the peoples of the region to live in peace and security, away from any external intervention.

“We had fruitful discussions on various issues, especially boosting the bilateral relations,” Mikdad said during a press conference with his Iranian counterpart Hussein Amir Abdollahian on Monday.

He indicated that Syria’s victories over the Israeli occupation- backed terrorist organizations make “Israel” resorts to direct aggression ,and the response to it is through hunting the remnants of these organizations.

Regarding the sanctions imposed by the US and the West on Syria, he affirmed that they are illegal and contradict the human rights and principles.

The Minister hailed the visit of the UAE Foreign Minister to Damascus, describing it as a good step, voicing hope that other Arab countries will take similar steps.

As he also underlined that the nuclear program of Iran is peaceful, and what is rumored otherwise is not true, adding that the US should return to the agreement. Mikdad pointed out that economic relations between Iran and Syria were the focus of the discussions, and “we look forward to the continuation and deepening of these relations, not only in a bilateral framework, but in a collective framework that includes all countries of the region, because the sides that interfere to prevent real economic cooperation among these countries are the Western powers.”

“All the files that we discussed are important, and we agreed to continue exchanging visits and signing new documents that strengthen economic relations between Syria and Iran and  create a new regional situation in which there is no international competition that only serves the interests of countries which do not want the peoples of the region to live in security, stability and peace.”, Mikdad said.

He added that Syria welcomes all Iranian capabilities to invest in the country, and there is no restriction on that.

Mikdad affirmed that the blockade imposed by the US and Western countries on Syria and Iran is responsible not only for the worsening of economic conditions in the two countries, but all over the region because “when Syria suffers, Iraq, Lebanon and other countries will suffer,” pointing out that the US and Western countries, by their insistence on continuing these sanctions, contradict all the values and principles of human rights.

He asserted that Iran rejects the US military presence on the Syrian territory ,and stresses the need for these forces to leave.

Abdollahian stressed Syria’s full right to defend its territory and protect its people against the Israeli aggressions that violate international laws and destabilize security in the region.

The Iranian Foreign Minister indicated that his country went to the Vienna talks seriously and informed the Europeans that they should have a plan to lift the blockade imposed on the Iranian people.