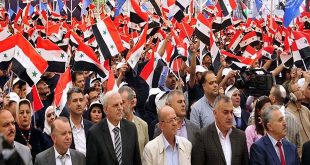 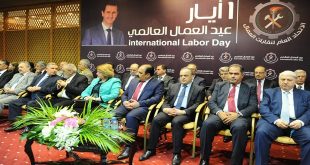 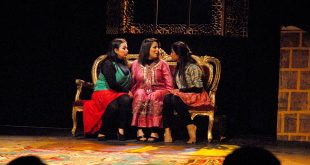 Central Workers Theatre Festival kicks off with “the Guests” play

Damascus, SANA – The 26th conference of the General Federation of Trade Unions (GFTU) kicked off on Sunday at al-Faihaa Hall in Damascus under the auspices of President Bashar al-Assad.

Assistant Regional Secretary of al-Baath Arab Socialist Party Hilal al-Hilal said in the opening speech that the importance of the conference this year stems from the fact that it will help in evaluating the Federation’s work process and setting up new mechanisms to upgrade the labor sector’s performance.

Al-Hilal highlighted the need that governmental, partisan and unionist efforts be doubled to effectively confront the deep negative impacts of the current crisis in the country on the economic and social domains.

He cited the systematic destruction inflicted upon the infrastructure, establishments, public utilities and service and economic facilities at the hands of the takfiri terrorist organizations within a premeditated plan to debilitate the Syrian economy.

For his part, GFTU Chairman Shaaban Azzouz made it clear that the challenges of implementing the government work plan to repair all the damage done are quite huge, hailing in this context the efforts exerted by the government in the framework of supporting workers and the economy.

Azzouz stressed that the Syrian workers stand side by side with the army towards winning in the terrorist war internationally-waged against Syria since 2011.