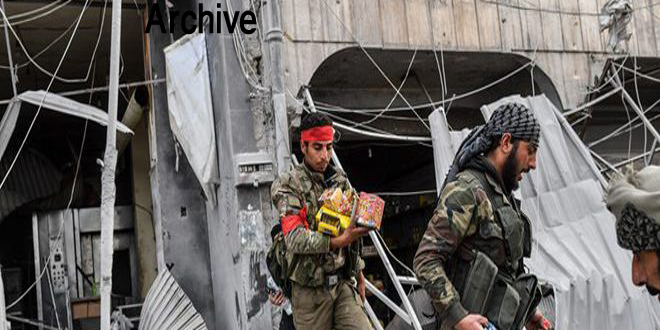 Aleppo, SANA- Turkish regime backed-terrorist organizations have continued their aggressive acts against the citizens as they imposed royalties on farmers and olive presses amounting to 50 percent of the current olive crop’s price.

The terrorist organizations have also confiscated the property of several locals in the occupied area of Afrin, north of Aleppo city.
Since the beginning of the current olive crops harvest season, terrorists of the so-called ” al-Jabha al-Shamiya” have imposed financial royalties on olive farmers and olive presses’ owners in some villages of occupied Afrin, north of Aleppo,” local sources told SANA.

Since its aggression on Syrian territory on October 9th 2019, Turkish occupation forces and their terrorist mercenaries have carried out criminal acts against the locals such as kidnapping, killing and displacement, in addition to damaging the infrastructure and service facilities.