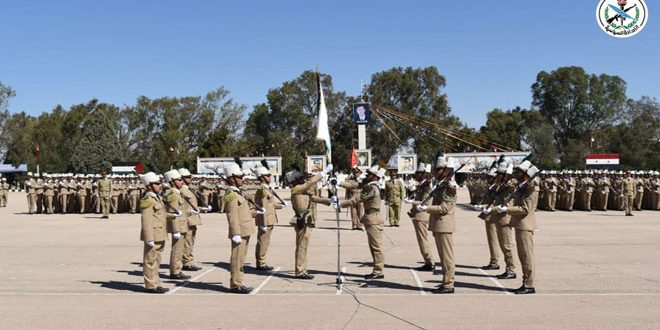 Homs, SANA- Under the patronage of President Bashar al-Assad , the Commander-in-Chief of Army and Armed Forces, and on the 48th anniversary of October Liberation War, a new batch of the Military Academy students were graduated.

The President was represented to the ceremony by Deputy Commander-in-Chief of the Army and Armed Forces, Defense Minister, Gen. Ali Abdullah Ayoub .

Following the military parade, General Ayyoub, delivered a speech in which he conveyed the President’s congratulations and his best wishes for students to succeed in carrying out their national duties along with their colleagues in all sites of the Syrian Arab Army that defends security of the citizens and the homeland.

Meanwhile, units of the Syrian Arab army celebrated the 48th anniversary of October Liberation War which was a turning point in the Arab Nation’s history.