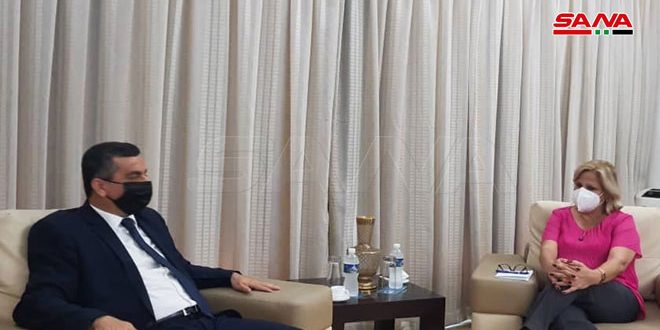 Havana, SANA- The Syrian and Cuban talks held on Tuesday in the Cuban capital of Havana focused on enhancing bilateral economic relations.

During the meeting, González expressed her country’s support to  Syria in all domains, asserting the importance of upgrading the economic relations between the two countries to the best levels.

For his part, Mayya briefed in the Cuban side on the economic situation in Syria and the obstacles facing it due to the unilateral coercive economic measures and the unjust siege imposed on the country by the US and European countries and the war waged on it for more than ten years.

The Syrian Ambassador added that Syria will continue the battle against terrorism until liberating all its territories and restoring stability and security to the country.

Both sides also reviewed the standing situation of economic relations between Syria and Cuba, in addition to a number of issues and proposals for strengthening and developing these relations.