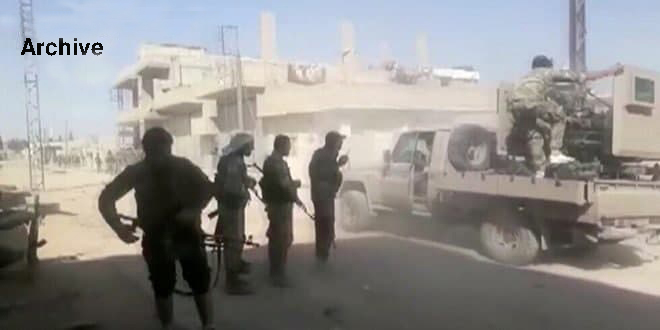 Hasaka, SANA-The Turkish occupation forces and their terrorist mercenaries continued their violations against civilians in areas of Ras al-Ayn in Hasaka northern countryside.

Civil sources told SANA reporter that during the past few days, mercenaries of Turkish occupation, particularly the terrorists of so – called “Fırqat al-Hamzat group “kidnapped a number of civilians near M4 road and took them to one of their headquarters, in order to blackmailing their families for their release in exchange for sums of money with foreign currencies.

The sources noted that Abu Ali al-Lebanani was among the persons who do these criminal acts.

In a relevant context, a source in Hasaka city said that, the mercenaries of Turkish occupation exploit the arrival of civilians from Ras al-Ayn to inspect their houses in the Turkish occupation-controlled areas to be kidnapped there.

“While heading to Ras al-Ayn city to inspect my properties, I was kidnapped by the mercenaries of Turkish occupation, they charged me with dozens of charges. I was kidnapped for more than 10 days and they used all means of torture with me, including leaving me for hours standing on a table with my hands and feet tied ,” said a civilian from the Ras al-Ayn who survived after being kidnapping.

2021-10-03
hybah
Share
Previous Army units start combing Nawa City and its environs, Daraa northern countryside (photos)
Next Operation of settling status of a number of gunmen, the wanted in a number of areas, Daraa countryside starts