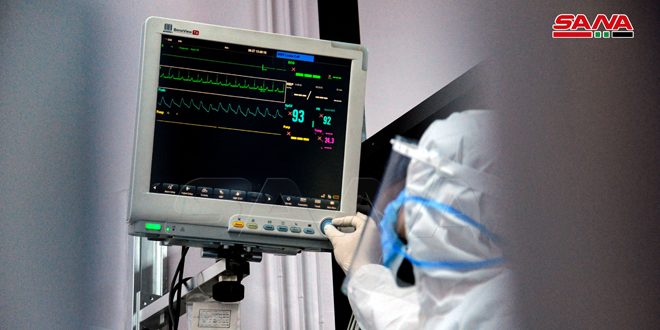 Damascus, SANA- Health Ministry warned Saturday that the decline recorded in the number of infections with coronavirus during the past few days doesn’t mean overcoming the fourth wave as infections could increase again.

The Ministry said that the only solution to reduce infections is through adopting precautionary measures and vaccination.

Director of Readiness, Ambulance and Emergency Department at the Ministry, Dr. Tawfiq Hasaba, told SANA in a statement that after infections have reached their highest daily level last September with 442 infections the curve started to drop slowly in various Syrian provinces reaching 255 infections last Friday.

Dr. Hasaba pointed out that the infections that have been monitored in the hospitals don’t limit to a particular age group, asserting that the symptoms of tonsillitis cannot be classified within the symptoms of coronavirus during the current wave as we are going through a transitional season.

The number of the confirmed cases have recorded last September the highest official statistic since the beginning of the spread of Coronavirus in Syria on the 22nd  of March last year with 6290 cases, of which 1561 infections in Lattakia, 1084 cases in Aleppo, 973 in Damascus, 633 in Damascus Countryside and 555 in Homs.

While the number of deaths reached 234 persons during the same period as the largest number of the deaths recorded in Damascus with 73 deaths and 56 cases in Aleppo, according to the Ministry’s statistics.