Mikdad to Pedersen : UN has to assume its responsibilities about respecting Syria’s sovereignty 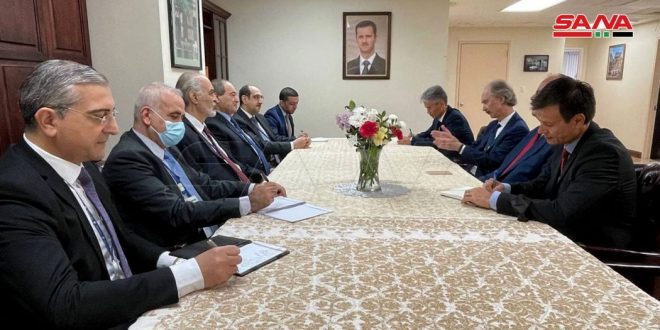 New York, SANA-Foreign and Expatriates Minister Faysal Mikdad met UN Special Envoy for Syria, Geir Pedersen who briefed him on the efforts exerted in the context of facilitating the convening of the 6th round of the Committee for Discussing the Constitution, referring to the meetings and communications he has conducted recently in this regard.

For his part ,Mikdad stressed that the committee has to work under Syrian leadership and ownership , and pave the way for its members to discuss issues related to the committee’s work without any foreign interference.

He also said that the UN and the special envoy have to assume their responsibilities and guarantee Syria’s sovereignty and territorial integrity, referring to the US and Turkish occupations of Syrian territories.

Mikdad also met Minister of Foreign Affairs of Serbia , Nikola Selaković, with both sides discussing means of developing relations between the two friendly countries on the political ,economic and cultural levels.

In turn ,Selaković welcomed Syria’s participation in the meeting of Non-Aligned Movement marking the 60th anniversary of the movement to be held on October, 11th and 12th 2021 in the Serbian capital of Belgrade.

In the same context ,Miqdad discussed with Minister of Foreign Affairs of the Republic of Azerbaijan ,Jeyhun Bayramov, topics put on the agenda of the movement’s work in light of Azerbaijan’s leadership to it , stressing the importance of activating its work in the issues that constitute a priority to its members, in addition the developments on the international arena and exchanging viewpoints in this regard.