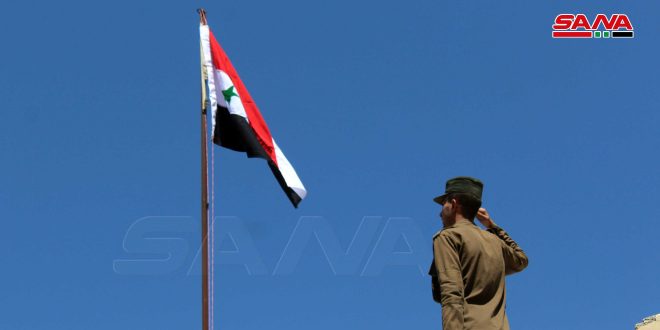 Daraa, SANA-The national flag was hoisted on Monday over Tafas police station in Daraa northwestern countryside, and the police services returned to citizens while units of the Syrian Arab Army were redeplyed in the city.

Daraa Governorate Police Commander, Dirar Mujahm al-Dandal, said in a statement to SANA reporter that Tafas police station will return to its normal activities and the service departments will return to provide their services to citizens as they were, stressing that the return of security and stability to the city was thanks to the great cooperation between the state and Tafas notables and the support of the Syrian Arab Army . For the third day in a row, the process of settling the status of militants, the wanted persons and deserters from military service and handing over weapons to the Syrian Arab Army continued within the center of Tafas Girls High School.