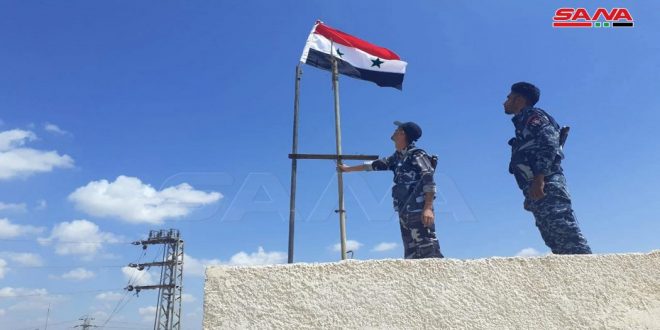 Daraa, SANA- While units of the Syrian Arab Army and Internal Security Forces were redeployed in Mizayrib town in Daraa western countryside, the national flag was hoisted over its Municipality building paving way for the return of security and stability to the area.

The step comes after legal status of tens of militants, wanted persons and military deserters were settled.

Daraa Governorate Police Commander, General Dirar Mujahm al-Dandal, told SANA reporter that “this day is a new victory added to the victories of the Syrian Arab Army,” noting that “the army’s heroism in defeating terrorism paved the way for settlements to those wanted and deserters who handed over their weapons to the army.’’

Meanwhile, process of settling the status of militants , the wanted and deserters from military service continued for the second day.