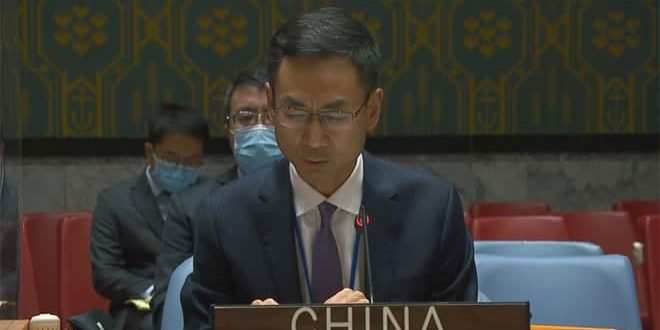 New York, SANA- China’s deputy permanent representative to the United Nations Geng Shuang called on the Organization of Prohibition of Chemical Weapons (OPCW) for cooperation and dialogue with Syria, stressing the necessity of respecting its concerns and avoiding exerting political pressure on it.

Xinhua quoted Shuang as saying during a session of the UN Security Council on Thursday that China encourages the Technical Secretariat of the Organization for the Prohibition of Chemical Weapons (OPCW) to strengthen dialogue with Syria to jointly resolve outstanding issues.

“The international community should create favorable conditions for dialogue and cooperation between the two sides and respect the legitimate concerns of Syria and avoid exerting political pressures,” he said.

“We must go back to the framework of the Chemical Weapons Convention to resolve the issue of the Syrian chemical weapons. All States Parties should safeguard the authority and integrity of the convention. The investigation and handling of incidents of alleged use of chemical weapons must be in strict compliance with the provisions of the convention and the Verification Annex and follow the principles of objectivity, impartiality and professionalism,” said Geng.

“The establishment of the Investigation and Identification Team is beyond the authorization of the convention,” he said. “We have always had concerns about its working methods, procedures and staff composition. China urges all States Parties to observe the principle of multilateralism, strengthen dialogue and consultation, reduce political confrontation, and work together to create favorable conditions and a good atmosphere for the OPCW to resume its normal functioning.”