Terrorists in Daraa try to hinder process of their exit to northern Syria, intimidate civilians 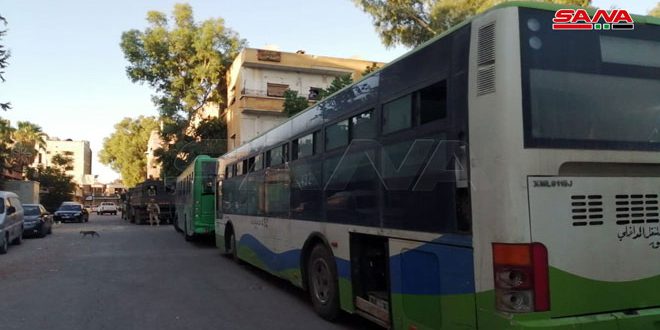 Daraa, SANA- With the first attempt for achieving the process of the exit of terrorists who reject the settlement from the neighborhoods of Daraa al-Balad, al-Sad Road and the camp on Tuesday evening, terrorists attacked the neighborhoods of Daraa city with mortar shells, in a new attempt to obstruct all efforts and initiatives that have been made to end terrorists’ presence in the area and to hand over weapons and restore normal life to it.

SANA’s reporter in Daraa stated that a number of buses entered Daraa al-Balad area to transport the terrorists who reject the settlement to northern Syria, where thousands of displaced citizens from those areas gathered at al-Saraya checkpoint, waiting for the terrorists to leave in order to return to their homes, which they left under compulsion about a month ago, but the terrorist groups entrenched in Daraa al-Balad launched several mortar shells at safe neighborhoods in Daraa city, in a new attempt to intimidate the residents and hinder the exit process. On Monday night, terrorist groups attacked with about 14 mortar shells al-Kashef neighborhood, the industrial zone, the fire brigade and the Gharaz area, causing material damage to homes and infrastructure, and they also attacked with machine guns some checkpoints of the Syrian Arab Army.

Meanwhile, the Syrian Arab Army brought on Tuesday morning heavy military reinforcements, which included a convoy of tanks, heavy artillery, and troop transport vehicles that arrived in the city of Daraa to end the abnormal situation in the city and restore security and safety to it.

The army units had opened al-Saraya corridor for civilians wishing to leave the areas under the control of terrorists towards Daraa al-Mahata, and the state had prepared a makeshift housing center with various basic supplies and materials to receive them.