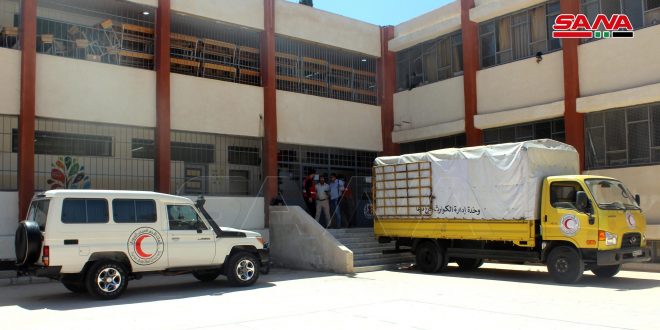 SANA reporter said that Daraa Governorate, in cooperation with several bodies, started preparing a new temporary housing center in Daraa city to receive citizens willing to leave the terrorist-controlled areas in Daraa al-Balad , Tariq al-Sad, and al-Mukhayam via al-Saraya corridor which the Syrian Army had opened it. The army units brought reinforcements to Daraa city on Friday to put an end to the terrorists’ attacks and establish safety and security in all parts of the province after the terrorist groups thwarted the settlement efforts and refused to hand over their weapons.

A military source said that al-Saraya corridor which connects Daraa al-Mahatta with Daraa al-Balad has been opened on Saturday morning for 24 hours to receive people who want to leave, including children, women, elderly.

The source added that the temporary housing center was prepared at Ahmed al-Rifae school and was equipped with all the requirements to receive people who want to leave the areas controlled by terrorists.

The source indicated that the objective of increasing the army deployment on the international highway is to ensure the movement of travellers towards Nassib-Jaber border crossing with Jordan through increasing the military points deployed on this highway after several attempts by terrorists to block it and intimidate travellers and citizens..

The army units also prepared a field hospital in the city and a medical point to support existing hospitals along with several ambulances and medical and nursing cadres.