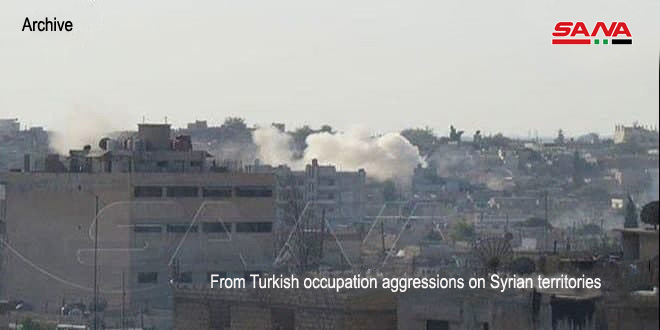 Hasaka, SANA- A woman was martyred and a number of civilians were injured as Turkish occupation and its terrorist mercenaries escalated attacks with artillery and missile shells on the town of Abu Rasin and its surroundings in the northwestern countryside of Hasaka.

Local sources told SANA that intense missile bombing with more than 50 shells was launched by the Turkish occupation forces and terrorist groups on Tuesday evening on Abu Rasin town and the surrounding villages, including al-Dardara village in the northwestern countryside of Hasaka, claiming the life of a woman and injuring a number of civilians and causing huge material damage to the people’s properties and homes.

The sources added that the artillery and missile shelling forced a number of families to flee their villages .