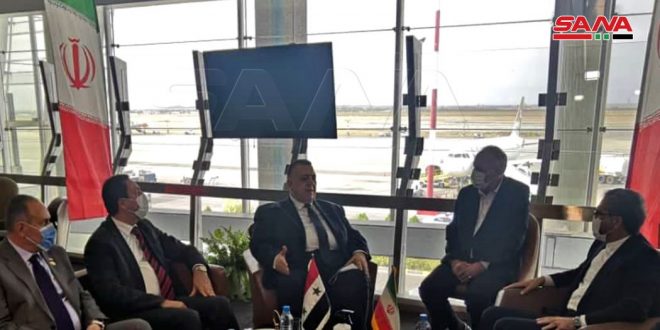 Tehran, SANA- Speaker of the People’s Assembly, Hammoudah Sabbagh, heading a parliamentary delegation, arrived in Tehran on Tuesday to take part in the oath-taking ceremony of Iranian President Ebrahim Raisi and extend congratulations by the name of President Bashar al-Assad and on behalf of Syrian people, government and the Assembly.

In a press statement, Sabbagh described as historic and deeply-rooted the relations between the Syrian Arab Republic and the Islamic Republic of Iran, affirming the unity of the track and destiny that gathers the two brotherly countries.

The inauguration ceremony of the Iranian President  began earlier today in the Iranian capital, Tehran, in the presence of Leader of the Islamic Revolution in Iran, Sayyed Ali Khamenei. The ceremony was limited to senior Iranian officials in light of the preventive measures taken against Corona epidemic.

President Raisi, 60- year- old, will take the constitutional oath on Thursday before the Iranian Shura Council.

Raisi won the presidential elections in Iran held on June 18th, with 61.95 % of the votes.