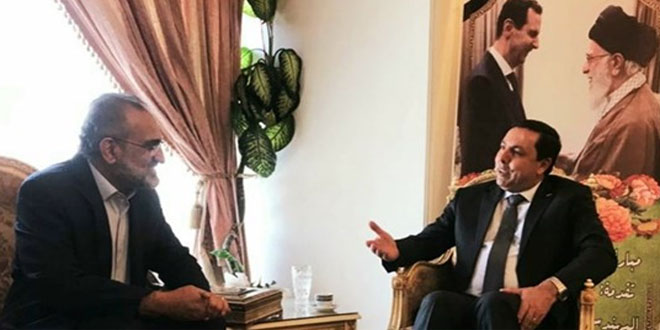 Tehran, SANA- Syria’s Ambassador to Iran Shafiq Dayoub discussed on Sunday with the Rector of the University of Islamic Denominations of Iran Seyed Mohammad Hosseini means of bolstering joint scientific, cultural and academic cooperation between the two countries and admitting the Syrian students in the university.

During the meeting held at headquarters of the Syrian Embassy in Tehran , Dayoub stressed on the importance of scientific cooperation between the two countries as one of our priorities at this stage is to enhance level of this cooperation to level of standing  political and strategic relations between them.

“ In recent years , we have been partners in the war against terrorism and we hope to be partners in reconstructing of what has been destroyed by terrorism in Syria , particularly the educational infrastructure  which was greatly damaged as a result of the terrorist acts,” he added .

He underlined that the work is still going strong to enhance the cooperation in the scientific and the technological fields where a draft of agreement has been prepared in this regard to be signed in the near future, stressing the strong links between the two countries.

For his part, Hosseini said that the relations between Iran and Syria will witness further development and cooperation during the new stage in scientific, cultural and economic domains.

Hosseini affirmed that wide popular participation in the presidential elections indicates the defeat the enemies of Syria and the triumph of the resistance.

Hosseini expressed the University’s readiness to admit the Syrian students at all academic levels.