Hundreds of displaced people return to their houses in al-Yarmouk area , Damascus 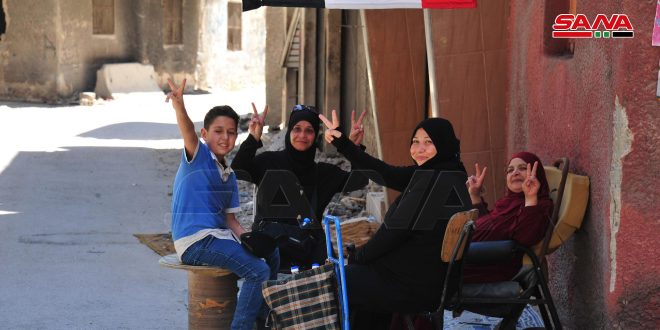 Damascus, SANA- In the framework of efforts exerted to return displaced people to their towns and cities, which have been liberated from terrorists, thousands of displaced Palestinians and Syrians returned to al-Yarmouk area in Damascus after rehabilitating the area from damage caused to it due to the terrorists’ attacks.

Al-Yarmouk area was exposed to large destruction as a result of acts of terrorism carried out by Daesh (ISIS) and  Jabhat al-Nusra terrorist organizations, which  had targeted hospitals, public schools, and UNRWA schools, in addition to houses of Palestinian refugees and Syrian citizens who  lived together in al-Yarmouk camp ,which was established in 1957 as a symbol of the right of return.

Secretary General of the Palestinian Popular Struggle Front, Khaled Abd al-Majid said in a statement to SANA reporter after liberating the camp and preparing all conditions for the return of the Palestinians and the Syrians to their houses , the procedures have been taken to protect the civilians’ properties.

“Nearly 700 families had been returned to the area, among them hundreds of students who are provided with transportation to schools in the neighborhoods, in parallel with providing facilities, including infrastructure and service workshops to rehabilitate water, electricity and sewage networks as soon as possible,” Abd al-Majid added.

He pointed out to necessity of the UNRWA and the Palestinian factions’ contribution to rehabilitating schools and health centers which have been destroyed by terrorism.

Earlier, Damascus Governorate rehabilitated a water pumping station in theThirty Street, with13 wells equipped for pumping, in addition to removing debris from the main and sub-side streets , and rehabilitating the sewage network.

SANA’s camera toured a number of streets in Yarmouk camp and met a number of people who has been rehabilitating their houses. “We returned to our houses after they were cleared from the terrorists’ remnants, as all the requirements of building materials and others were brought in without any obstacles to rehabilitate what has been destroyed by terrorism,” Hani Omar Hussein from al-Nasirah town said.

In turn, Taleb Mohammed Kinaan afiirmed that he will return to his house with his family after maintained of electricity and sewage networks have been completed, thanking the bodies concerned which provide all the facilities for the return of the people to al-Yarmouk area.