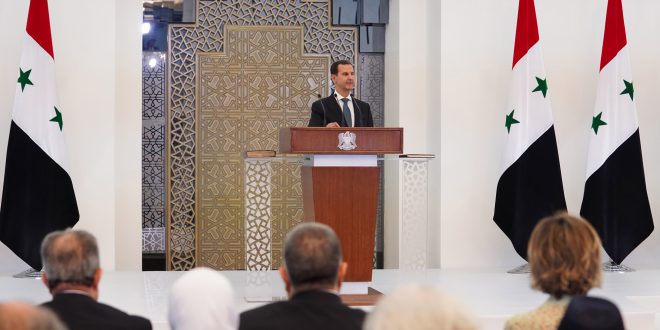 Moscow, SANA- Many Russian media outlets have shown great interest in President Bashar al-Assad’s speech after taking the oath on Saturday, focusing on the contents of the speech, especially in the field of investment and the continuation of the war against terrorism and the liberation of the occupied Syrian territories from the   terrorists and their supporters of foreign forces.

Komsomolskaya Pravda newspaper said on its website that President al-Assad stressed in his oath speech the necessity of investing in alternative energy fields and called on those who left their homeland to return to it, expressing thanks to the voters for their feeling of belonging to their homeland.

For its part, Russia Today channel in the Russian language said that President al-Assad, who won the presidential election that took place on the 26th of last May, took the constitutional oath before the Speaker and members of the People’s Assembly.

In turn, Vzglyad website mentioned that President al-Assad thanked the Syrian people for their steadfastness and heroism in overcoming the difficulties caused by the terrorist war on Syria that has been going on for ten years.

Vesti Ru website focused on President al-Assad’s salutation to the Syrian people’s steadfastness in the face of terrorism and their protection of the homeland with their blood, expressing confidence in the complete failure of the schemes of those who intended to divide Syria.

The website pointed out to President al-Assad’s affirmation that he intends to focus his efforts on rebuilding the country’s economy and directing investments in particular to the alternative energy sector.

The website of “Argumenty I Fakty “newspaper cited the words of President al-Assad, addressing the Syrian people, by saying, “You have demonstrated your awareness and your national affiliation during the war that the peoples who know their way to freedom do not get tired, no matter how long and difficult this way is, and they do not lose their resolve or determination to defend their rights no matter what the colonists have prepared of the tools of savagery and intimidation….”

RIA FAN News Agency said that President al-Assad stressed in his oath speech the importance of values without which stability is impossible in any country, hailing   the achievements in the field of security that have been gained in recent years.