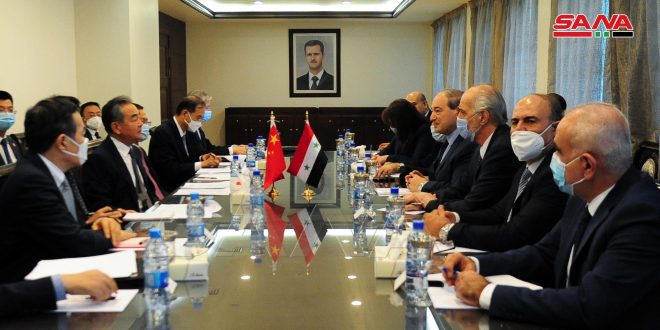 Damascus, SANA- Foreign and Expatriate Minister, Faysal Mikdad, held with the Chinese Foreign Minister, Wang Yi, and the accompanying delegation political-economic talks, during which they discussed topics of common interest between the two countries.

During the meeting, Mikdad reviewed the cooperation areas between Syria and China, including the fight against terrorism, economic development and coordination in all international forums.

Mikdad pointed to the rejection of the two counties of the unilateral economic measures, voicing Syrian people and government’s appreciation to China for its support in different domains.

He also pointed out that Syria and China have recently celebrated the 65th anniversary to establishing the diplomatic relations, highlighting that these relations are deepening day after day.

For his part , the Chinese Minister affirmed commitment to Syria’s sovereignty and territorial integrity, indicating that the upcoming stage will witness boosting cooperation between Syria and China, which will deepen the two countries’ ability to confront the existing challenges.

In turn, Chairman of Planning and International Cooperation Authority ,Imad Sabouni, noted that the preparations between the two countries are underway to hold a meeting soon of the Chinese-Syrian joint committee.

Following the talks, An agreement on economic and technical cooperation was inked between Syrian and Chinese governments.

The agreement was signed by Sabouni and the Chinese Ambassador in Damascus Feng Biao.

The document of delivery of the first batch of food aid to Syria was also signed by Chairman of Syrian Arab Red Crescent (SARC) ,Khaled Hboubati and the Chinese Ambassador.