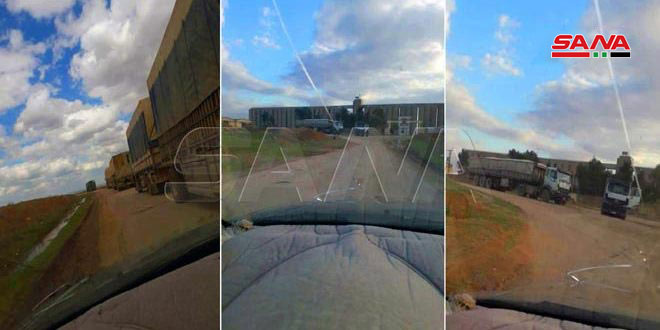 Hasaka, SANA- The US occupation forces on Sunday brought out a convoy of trucks loaded with stolen Syrian wheat from the silos of Tal Allo in Hasaka northern countryside to north Iraq.

Local sources in al-Suwaidiya village, in Hasaka countryside told SANA that a convoy consists of 24 trucks loaded with stolen Syrian wheat from the silos of Tal Allo with a number of covered tankers left on Saturday evening the Syrian territories, via the illegitimate al-Waleed border crossing, to north Iraq.

The US occupation forces brought out a convoy consisted of 44 military vehicles along with a number of trucks four-day ago.